I mentioned in one of my previous posts about entry and exit fees in Central America. They gouge you. Often I (along with other USA, Canadian, Australian and British) citizens were kept off the buses till we gave much more than all the other passengers. Being told that if we didn’t we could go back to the country we just paid to leave or they just calmly held our passports in their hands till we went to the window to pay the “required” amount. This was by far the most frustrating thing that happened in my trip through Central America.

There was actually two surfers I met between the countries of  Honduras and El Salvador who had each bought motorcycles in southern Mexico to ride and surf all the way to Panama. They had been gauged so much that along the way they had given away one of the motorcycles (they were being charged extra for each motorcycle along with the higher rates for being Australian) and were stuck between the two countries because they were $10 short for the passage into El Salvador. All of us who were not being allowed back on the bus till we anted up our higher price got our spare change and helped them get through too. What a mess.

So there are some really different things that go on in buses in Central America that most US citizens are just not familiar with….

Buses are not the only form of public transportation. 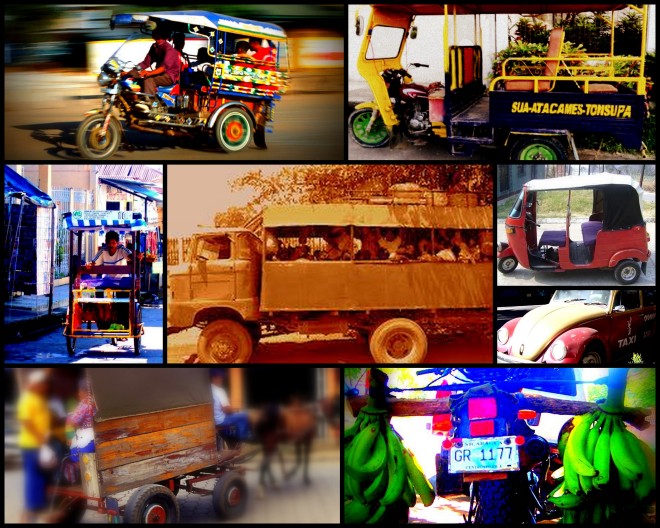 One of the cool things I found all over Central America are “rooms” to rent right in the terminals. So that you can get right on the bus from where you are staying. I did this a couple of times. Works out great when your bus leaves at some ridiculous time in the middle of the night or early morning.

I went through a lot of Central America by bus just stopping along the way to get out and relax, eat and explore a bit before traveling on. I had to get to Nicaragua by a certain date so I only had a short amount of time to get there. Traveling by car/bus in Central America is in no way like doing so in the States. So a hundred miles is a full days journey. I didn’t really know this ahead of time and so I was a bit crunched with sight-seeing time.

Of the countries I went through in Central America I very much want to go back and spend an extended period of time in El Salvador. I was really sad not to be able to explore it more than I did.

Here are several of my pictures from my ride south. 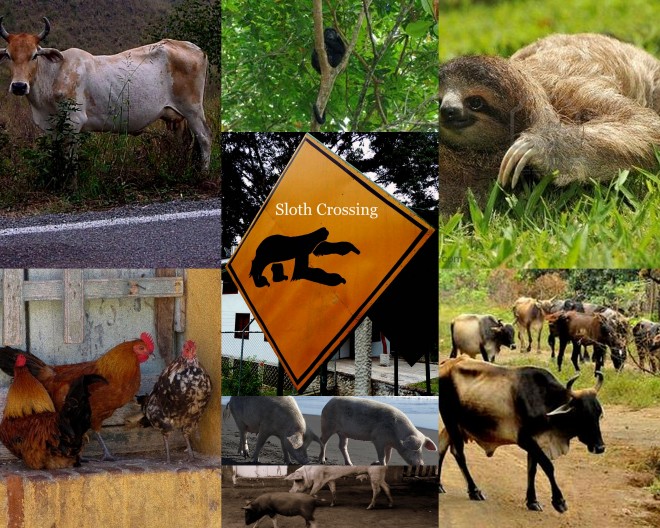 As I mentioned in the previous post I was told by my host to be in Guatemala way before sunset. We had made arrangements for him to pick me up at the local bus terminal  Zona 3 . Naively I had pictured a terminal station similar to the ones in the USA and Mexico. I was VERY wrong.

As I began to see there would be no way I would get to G.C. anytime close to sunset I asked one of the other passengers if I could use her phone. I tried calling Vladimir but he didn’t answer. So I just figured I would call when I got there. Well I was again WRONG. This is a crazy place. Basically a side walk goes around in an oval shape with Chicken Buses picking up and dropping people off in a system very similar to a conveyor belt.

It was pitch black when I got there and the guard told me there was no way he would let me use the phone. He was not kind and laughed at me. I will admit I was scared. I know that currently G.C. has a reputation for a lot of crime. I did not know what I was going to do and must have looked a bit stricken, because a group of businessmen from the USA saw me and wanted to know how they could help. I asked if any spoke fluent Spanish, two did, and if they would call my host to tell him I had just arrived. One guy did that while the other got one of the nicer guards to tell him my situation in Spanish.

Vladimir had already been to the station and thought I had stood him up. He had not received the call from me earlier from the other passengers phone. So he told the guy to have me stand under a light and not lose site of the guard and that he would be there in about 40 minutes. He then asked to speak to the guard. The guard, who speaks NO English, smiled at me and kept nodding the entire time he talked to Vlad.

Once everyone was off the phone the guys told me what Vlad had told them and that I was to stay right with the guard. He was going to take care of me. This guard would not let me go two steps away from him. He took my luggage in the hand opposite his gun and pulled it behind us as I walked with him on his route around the “terminal”.

BUT for me this wasn’t even the real scary part. Nope that was about to drive up. Vlad was good to his word and showed up a little over a half hour later. On a MOTORCYLCE. I am scared to death of them. I have two things on my Bucket List published here on this blog and I have already conquered one of them, well sorta, and that is guns. But I need to ease into these things (I did eventually take a ride on my friend’s motorcycle this past summer with a little less fanfare and really enjoyed it). So here I am in the  middle of one of the world’s most dangerous cities, with someone I have never physically met, in the middle of the nite getting on a motorcycle to cruise through town. I was terrified.

Off we went. My carry-on luggage between us, me on the back with a death grip on Vlad and him driving. Oh and no helmet. I would have been scared in that traffic in a car. This was crazy. He lives in a small village a half hour outside the city called, Santa Catarina Pinula. So cute. But back to the motorcycle ride. There is a foothill that goes straight up and then you go a city block and it goes straight down to get to the village. TERRIFYING!!!

Once we got there Vlad introduced me to his amazing family. I fell in love with his grandmother.

But Vlad had found out that day that he had to go to Belize. And since I wasn’t going to get on that motorcycle again to save my life I was going to be staying with the family without Vlad. Problem is only he had any command of English, sorta. His 16 yr. old sister knows a few basic words, and we did have Google Translate for what that is worth, but we ended up having to get the 7 yr old nephew to come stay from up the street to be the translator.

I had such a wonderful time with this family. They treated me like royalty. I went with the kids and bought fruit and some goodies for the family and a large bouquet of colorful roses for the grandmother. She was so surprised. She told me she had never been given any flowers in her entire life. We also went to a sort of Swap Meet. It was so fun and I got some really cute clothes. I love them all.

Oh and I woke up the first morning by being thrown off the bed. It was my first out-of-the-country earthquake!!

After several days I went with the kids to the edge of town and caught a taxi to the bus terminal to go to El Salvador. But as a side note that crazy foothill was still really scary even in a taxi…..