Woke up to iced coffee and a sausage McMuffin for nourishment on my travels to Denver (thanks Melissa). Got my back pack and my carry on into Jessie’s car and we were off by 8:15 am. I have really not done all that much traveling by air during this journey so it is always a luxury.
Once at the airport I got thru to get my ticket and since I already had my seat assigned I was off to the gate with no hassles.
It was so cool to be on the inaugural flight of Frontier from Knoxville to Denver. There were lots of animals from the Knoxville Zoo on display, Starbucks was there with coffee and treats, news crews were there and they gave away free t-shirts. Also they gave us ear phones b/c we were given free access to the TV. Nice treat.
Our flight arrived 25 minute early. I have never been on a plane that was anywhere near that early before! AWESOME!!
The other incredible thing is flying without ANY checked luggage. As I mentioned those benefits in an earlier post.
I went straight to eat something and then see a bit of what is becoming an anomaly, the Denver Airport. Very strange airport and goings on reported at this airport. But something I haven’t spent much time researching. There were a lot of odd murals that is for sure.  I took the express bus costing $9 with a free transfer for any of the public transportation options downtown. I had read that Denver was extremely commuter friendly and it didn’t disappoint. 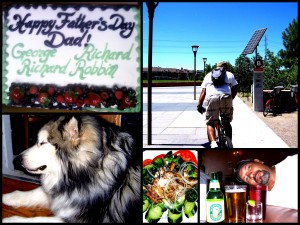 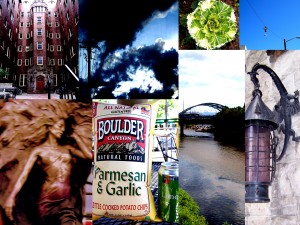 I was in Denver for two weeks and during that time I stayed at four different couch surfing hosts and with a high school friend, Richard Ybarra, so I was moving around a lot.

The first couple of nights I stayed with a really nice family in a great area just outside downtown Denver. They had the coolest dog ever. An Alaskan Malamute who I swear can say “I love you”. I immediately got a headache and had to go to bed. I was really weak. I guess I didn’t give enough credence to the mile high tips as I should have. It was a great place to relax and to get used to the altitude. We had some wonderful meals and lots of good conversation.

I went fishing with Richard and his son and grandson while I was with my first hosts. It was a really hard concept, this couch surfing, for my friend to take in. I had an interesting time convincing him and his family (all of whom have relocated from Southern California to Denver) that it was safe and that I am not totally crazy. Since they have known me since I was in the third grade though they have always known I was a bit off any way. 🙂

Richard and his niece,  Alyssa, dropped me off at Orin’s and Liz’s who were my next hosts for a three day stay. It was there that my backpack broke. Both of my hosts are well-traveled hikers and Orin told me that part of the weight that was hurting my back so much was from the metal all over my backpack. All of the latches, zippers, handles, and pullies on it are hard metal. Weighing it down considerably before I even got anything in it. He gave the backpack a quick fix till I could go in the next day or two to get another one.

At Paula’s, my next host, I started looking up packs online. Then we went to several stores. I finally found the one that I wanted. Also black with grey and white added. I am happier with them aesthetically and with less weight it is much much easier.

Paula and I had such a nice time relaxing and talking she has an AMAZING view of Denver from her window and we cooked meals to eat with glasses of wine on the balcony and just enjoy the views. She was just getting ready at 66 yrs old to embark on a really grand trip herself and we shared lots of tips.

The last couch surfing place I stayed in Denver was Annikah’s. I actually stayed with her for two nights before she left on a volunteering trip of her own in upper state New York for a month. See, it really seems like there are a lot of people that are like-minded to me in Denver!

I have to say I love Denver so much. The architecture blows me away. It is so beautiful. The city is so bicycle friendly. In downtown where one has to go up steps there is a slot to put the bike wheels so you can walk it along side of you up the steps. I loved that where there was a chain link fence a group had gotten together and knitted a floral design right into the chain links to make is so much prettier. All over downtown there were these random pianos. Wildly painted for anyone and everyone to just play. There is a creek that runs through it with bike paths literally everywhere.

The food was good and the beer even better.

Some of the best times I had while in Denver was fishing with the Ybarras. Lots of laughs, lots of relaxation, but alas no fish. HA

The other really cool outing I did while I was there was with my host, Paula. She took me to the famous Red Rock Amphitheater: http://en.wikipedia.org/wiki/Red_Rocks_Amphitheatre. WOW!! The history, the acoustics and the views. Anyone who goes to Denver and doesn’t make this place a number one thing to see with or without a concert is a fool.

I know that Denver is on my short list of places to live when I am done. The only thing it doesn’t have is a beach. Although it might be smart for me to try to visit a bit in say January before making a permanent decision. Time will tell…..

I've traveled all over the world for many years volunteering. I have taken photos and written about some of the most gorgeous places & people and want to share my life and experiences with others. I hope to use my company, Afewca, to do just that in as many ways as possible. Including art, writing, travel advice, etc. View all posts by Afewca