I have had the most amazing luck and blessings with my Couch Surfing Hosts all over California. I am constantly amazed. I ended up coming to the city of San Francisco a day early and put out an emergency request on the site. I found a great guy who lives in a beautiful home in the Castro District.

I had not heard of the Castro District before. It is a predominantly gay area of SF. My experiences have always been get a straight woman with a bunch of gay men and there is going to be fun. And that is exactly what I had. When I got to downtown I called my host, Jenner. He told me to walk across the street and get on the MUNI = the SF light rail and bus system. So I trudged with my suitcase, tote and backpack – yep I’m down to just those and I am thrilled – and got on the train. I met a really nice guy on the MUNI who told me where I needed to go. He then proceeded to pull my bags up the hill to where I was going. So nice. 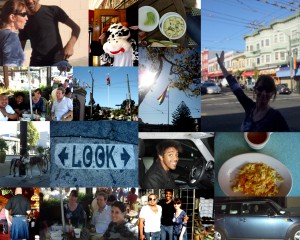 Jenner is a hoot. He lives in a great apartment and welcomed me with open arms. I was exhausted from so much travel so after we chatted for a bit he went on and met his friends and I took my book and went to bed. I did have the pleasure having his beautiful dog join me for some RnR.

The next day we went to breakfast and a coffee shop around the corner. We took the dogs. One is a Siberian Husky and the other a Weimaraner about 16 months old. They are beautiful and loved getting out and about. Breakfast was great. Cheesy eggs and pancakes, coffee and juice. The waiter was wearing a kilt with a studded belt that read “nudist”. Sometimes one doesn’t need to go “sightseeing” to see great sites.

After breakfast I was deciding where to go actual sightseeing for the day.  Jenner gave me transportation advice and I was all set to go on my way when he received a text. It was from one of his friends and I found myself invited to join them for brunch. Since we had already eaten we went for the margaritas and the fun company.

We got there at about 11 and got home about 5. One of the fastest days I have ever encountered. Sightseeing the rest of SF would have to wait a day or so cause I was on my way to my next hosting site. Jenner was great and gave me ride. My new hosts live in South SF .

When I got there my new hosts were still working. It worked out very well cause I just crawled into bed and read. I do love to relax by reading. The next morning I got up to another very very warm day in SF. No fog whatsoever.

My host, Dorit, asked me if I would like to go for a hike. I most certainly did. She took me to San Bruno Mountain. There were several spots along the hike to view the city.. At the top there is a 360 degree view. So pretty. Unfortunately there is such a financial crisis in California now that the park is technically closed. No money for park rangers. Sad. 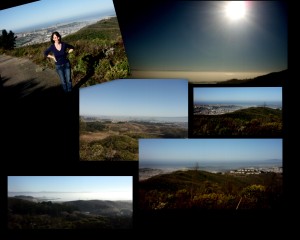 For my third day in SF I set out to see the city. I have visited the Bay area many times, but most always to see family. I have done a few of the touristy stuff there before, but I wanted to visit neighborhoods instead of just touristy places this time. That is what I did.

I took the bus to the middle of the City and just got off and began walking. The main goal of the day was to walk the entire Golden Gate Bridge which is now checked off my Bucket List. 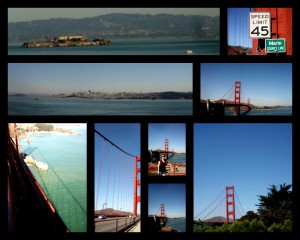 I walked all over SF. I spent time in wandering through Golden Gate Park. I saw so much of the beautiful architecture of the City. I spent time in Haight-Ashbury and the Wharf. It was so cool to just hang out everywhere. At my host’s home we watched movies and ate wonderful food. Very adventurous and relaxing time in a beautiful city. 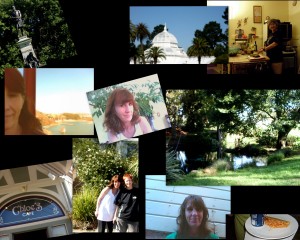 NEXT: I’m going to back track just a bit and post about the some of the adventures in San Luis Obispo and Monterey (I got a bit ahead of myself)…

I've traveled all over the world for many years volunteering. I have taken photos and written about some of the most gorgeous places & people and want to share my life and experiences with others. I hope to use my company, Afewca, to do just that in as many ways as possible. Including art, writing, travel advice, etc. View all posts by Afewca